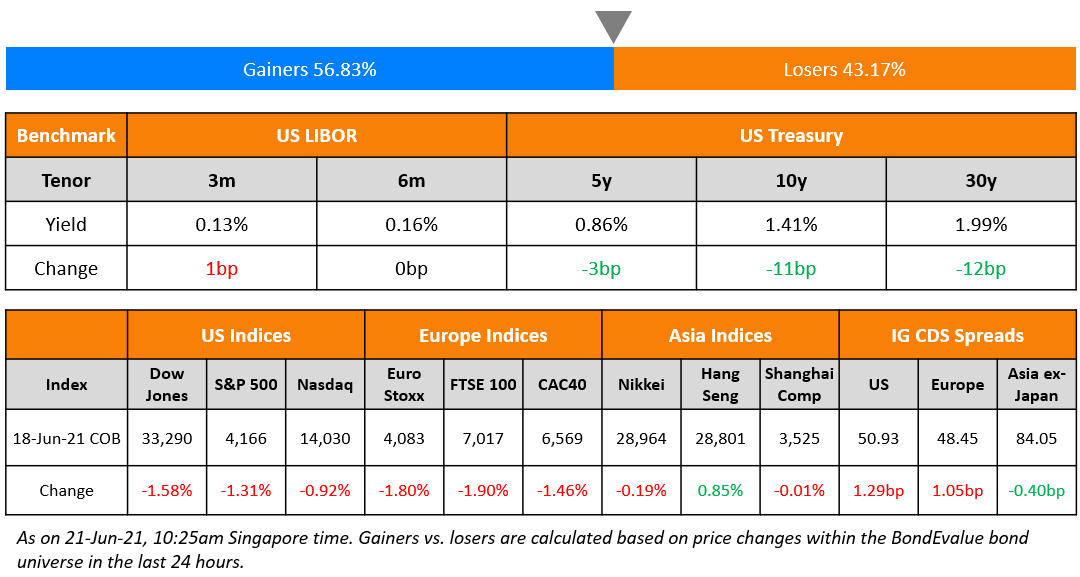 Wall Street ended lower at the close of last week, which was dominated by the FOMC meeting update. S&P and Nasdaq were down 1.3% and 0.9% respectively resulting in weekly losses of 1.9% and 0.3% respectively. Sectors across closed in the red with Energy and Financials leading the drop, down ~2.5%. The yield curve bear flattened (Term of the Day, explained below) on Friday as the US 10Y Treasury yields dipped ~11bp to 1.41% while the shorter dated 2Y and 5Y yields moved higher. European markets also closed lower by ~1.5%. UK’s May retail sales were down 1.4% against expectations of an expansion of 1.6%. Germany’s Producer Price Index (PPI) rose 1.5% in May compared to a forecast of 0.7%. US IG and HY CDS spreads widened 1.3bp and 5.2bp respectively. EU main and crossover CDS widened 1bp and 5.6bp respectively. Saudi TASI fell 0.6% while Brazil’s Bovespa closed 0.3% up. Asian markets opened in the red. HSI was down 1% while Shanghai was marginally down 0.1%. Asia ex-Japan CDS spreads were 0.4bp tighter. 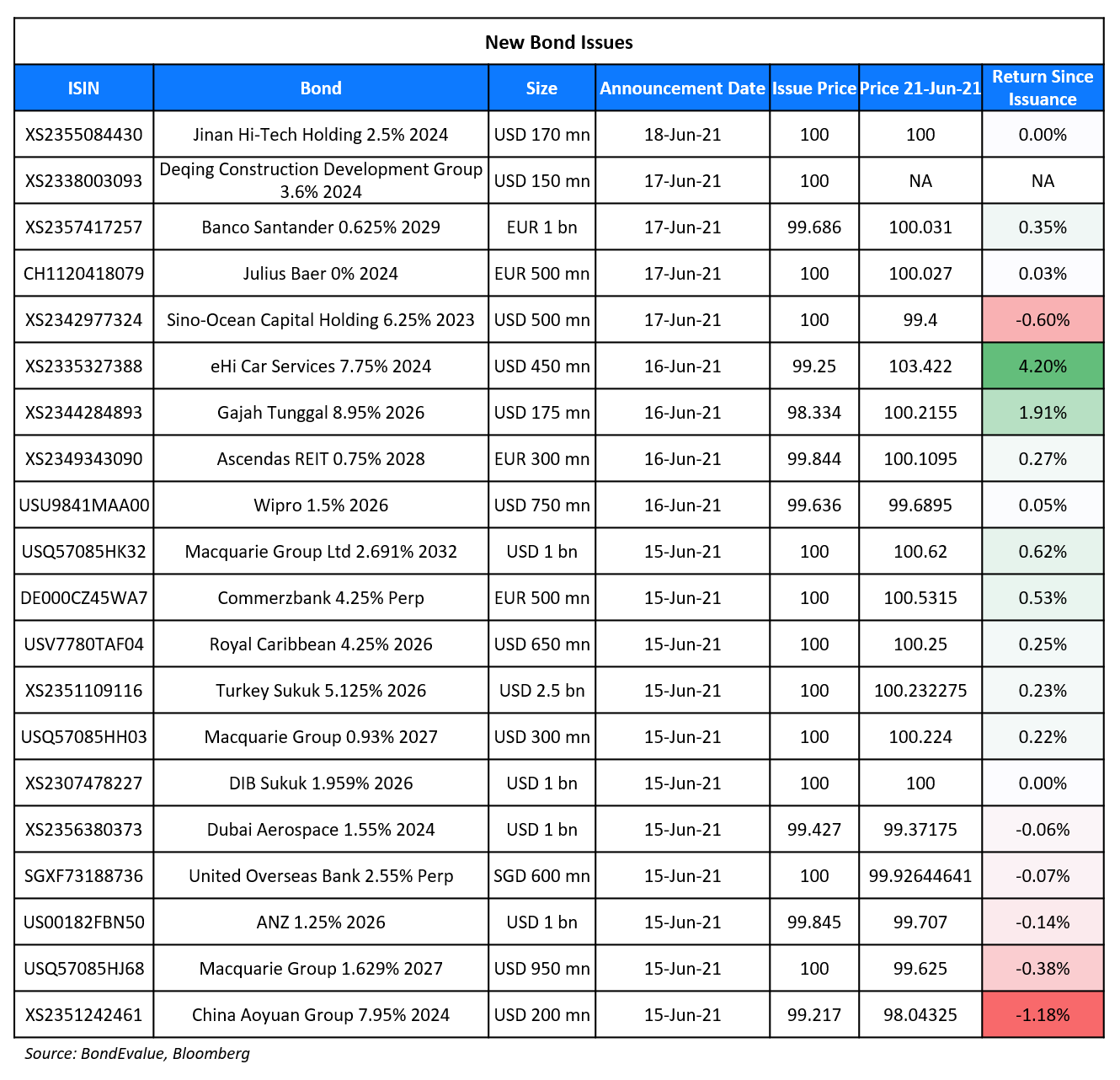 Jinan Hi-Tech Holding raised $170mn via a 3Y bond at a yield of 2.5%, 50bp inside initial guidance of 3% area. The bonds have expected ratings of BBB. 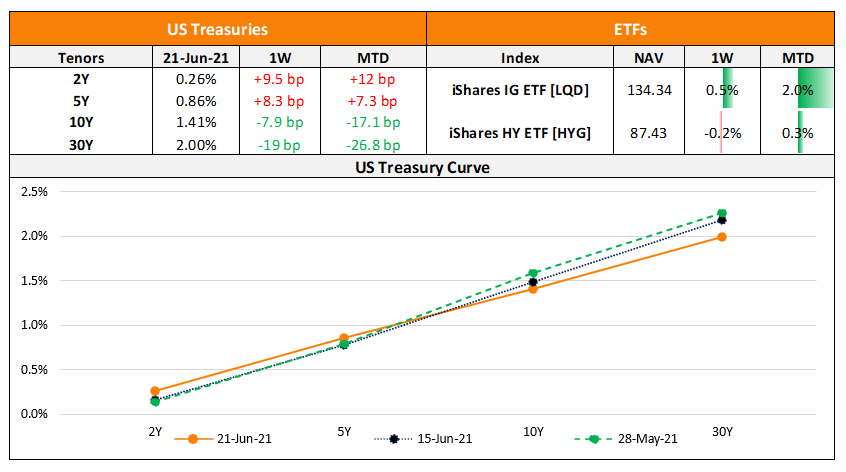 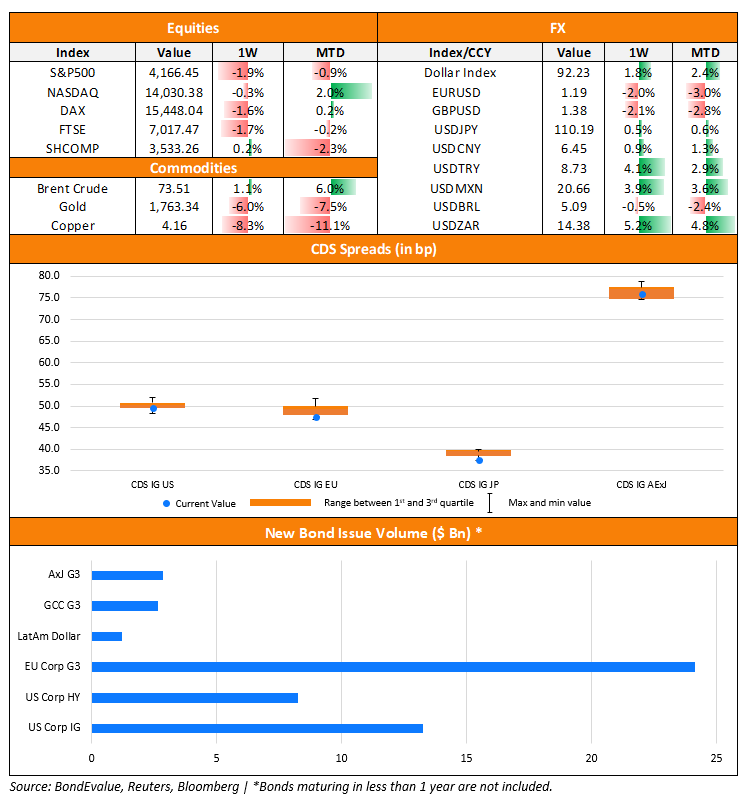 Bull flattening refers to a change in the yield curve where long-end rates move down faster than short-end rates. This not only has a flattening effect on the entire yield curve but also has a net effect of interest rates moving lower and bond prices moving higher. If the yield curve moves lower and bond prices move higher, it is considered a bull move, while the opposite is a bear move. In last Friday’s move 2Y treasury yields were flat while the 10Y and 30Y yields fell 11-12bp making the 2s10s and 2s30s yield curve flatter led by the 10Y and 30Y yields, a bull flattening move. This can be seen in “The Week That Was” US Treasury Curve chart.

Gennadiy Goldberg, an interest rate strategist at TD Securities
“It does seem as though the market has now shifted its view that the Fed’s going to let inflation run wild, to the Fed’s basically going to kill inflation in the cradle.” “The truth is probably somewhere in the middle.” “They are trying to reinforce their control of the narrative. I don’t think they want the narrative to be that the Fed is behind the curve on inflation,” Goldberg said.
James Bullard, St. Louis Federal Reserve Bank President
“We were expecting a good year, a good reopening, but this is a bigger year than we were expecting, more inflation than we were expecting, and I think it’s natural that we’ve tilted a little bit more hawkish here to contain inflationary pressures,” Bullard said.
In a report by  Calvin Tse and Kiranpal Singh, Citigroup analysts
Bullard’s comments “are confirmation on the shift at the Fed, which is now more concerned about upside inflationary pressures.”
In a report by JPMorgan analysts
“We think it’s possible long-end steepeners were being used as a positive carry way of positioning for higher yields, especially with the expected Fed liftoff date nearly two years away, and the unwinds of those positions added flattening
pressure.”
On bond spreads collapsing as investors rush into corporate debt
Adrian Miller, chief market strategist at Concise Capital Management
“The Fed has been controlling the transitory narrative which has provided confidence to corporate bond investors.” “After all, corporate bond investors are more focused on the expected strong growth path.”
Andrzej Skiba, head of US credit at BlueBay Asset Management
“For the time being people are not at all fearing the price action of a move higher in yields.” “Companies are doing really well and we are seeing a meaningful recovery in earnings.”
Rhys Davies, high yield portfolio manager at Invesco
“It’s very important for us that the yield we receive on a high-yield bond offers an appropriate level of compensation for the credit risks of investing. When yields are as low as this, that naturally becomes harder to say.” “It’s quite simple — the lower the yield on the high yield market, the more carefully investors need to navigate the market.”
On bond sales dwindling as US summer lull begins
Travis King, head of U.S. investment-grade corporates at Voya Investment Management
“This could lead to some opportunistic 30-year issuance” from high-grade companies.
In a note by Bradley Rogoff and team, Barclays Plc strategists
“While technicals remain strong, a decline in long-dated yields should negatively affect demand from insurers and pension funds, potentially weighing on long-dated investment-grade spreads.”
On investors dumping hedges on junk bonds even as Europe defaults loom
Vincent Benguigui, a portfolio manager at Federated Hermes
“The market is long because it has loads of cash to deploy and fundamentals are quite strong.” “It’s not a comfortable long though.”
Jochen Felsenheimer, managing director at XAIA Investment
“The next downturn will hit the market much harder as we have more leverage in the system and higher chances of mass defaults due to inflation risks sending rates higher.” 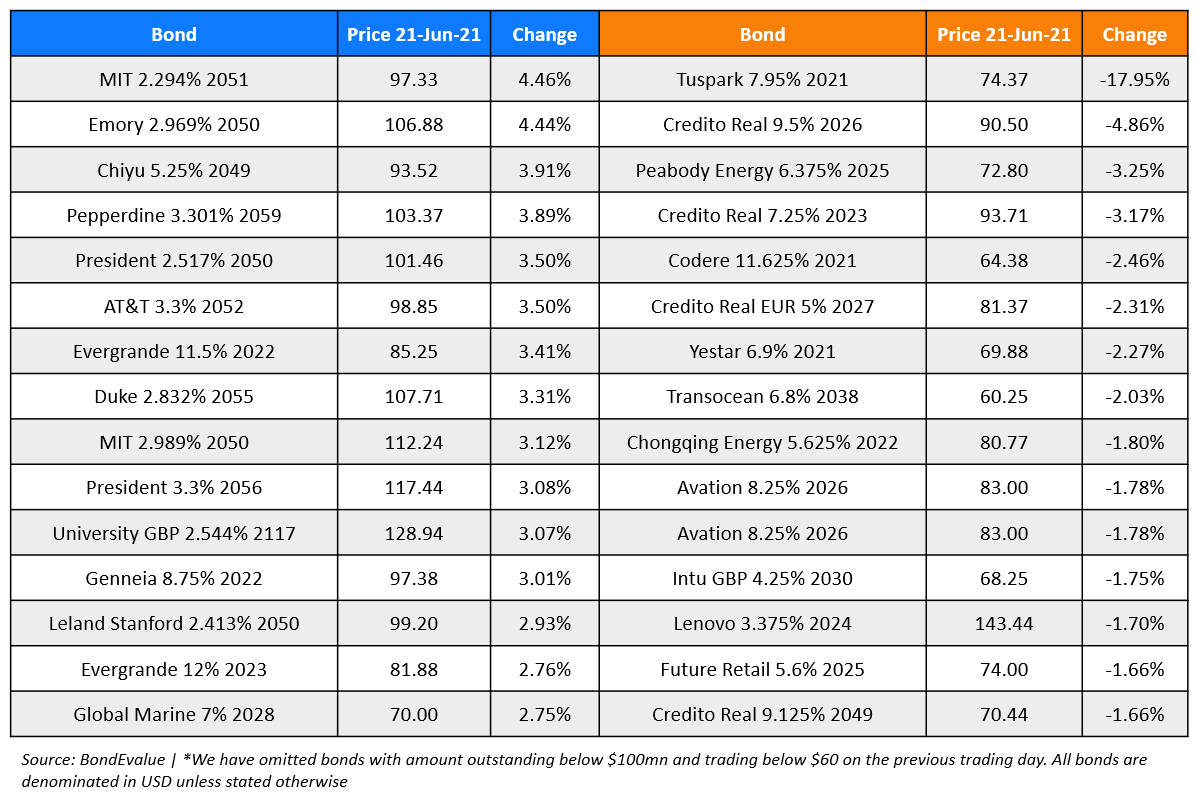