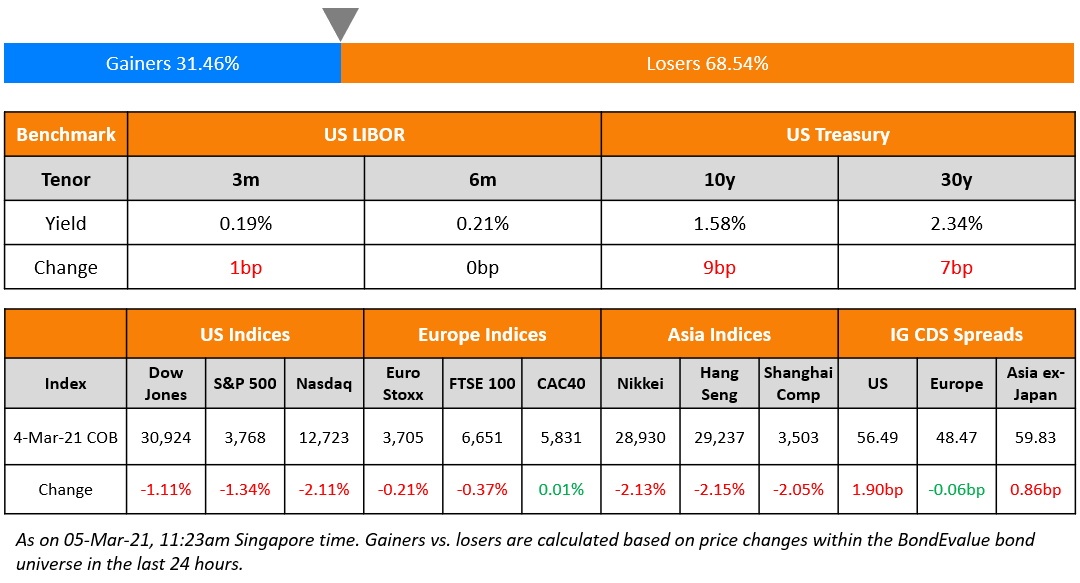 Equities continued to sell-off with S&P down 1.3% and Nasdaq down 2.1%, bringing the tech heavy index to negative territory YTD. US 10Y Treasury yields jumped another 9bp to 1.58%. While Fed Chair Powell maintained his stance on bond buying, he mentioned that ‘disorderly’ market conditions would concern him and added that he did not consider the recent spike in yields as disorderly. Newswires report that market participants were disappointed that he did not mention specifics on what the Fed would do to slow down long-term rates if desired. European equities held up better, flat to slightly lower. US IG CDS spreads were 1.9bp wider and HY was 9.5bp wider. EU main CDS spreads were flat and crossover spreads widened 0.1bp. Asian equity markets are down over 0.5% and Asia ex-Japan CDS spreads are wider by 0.8bp. 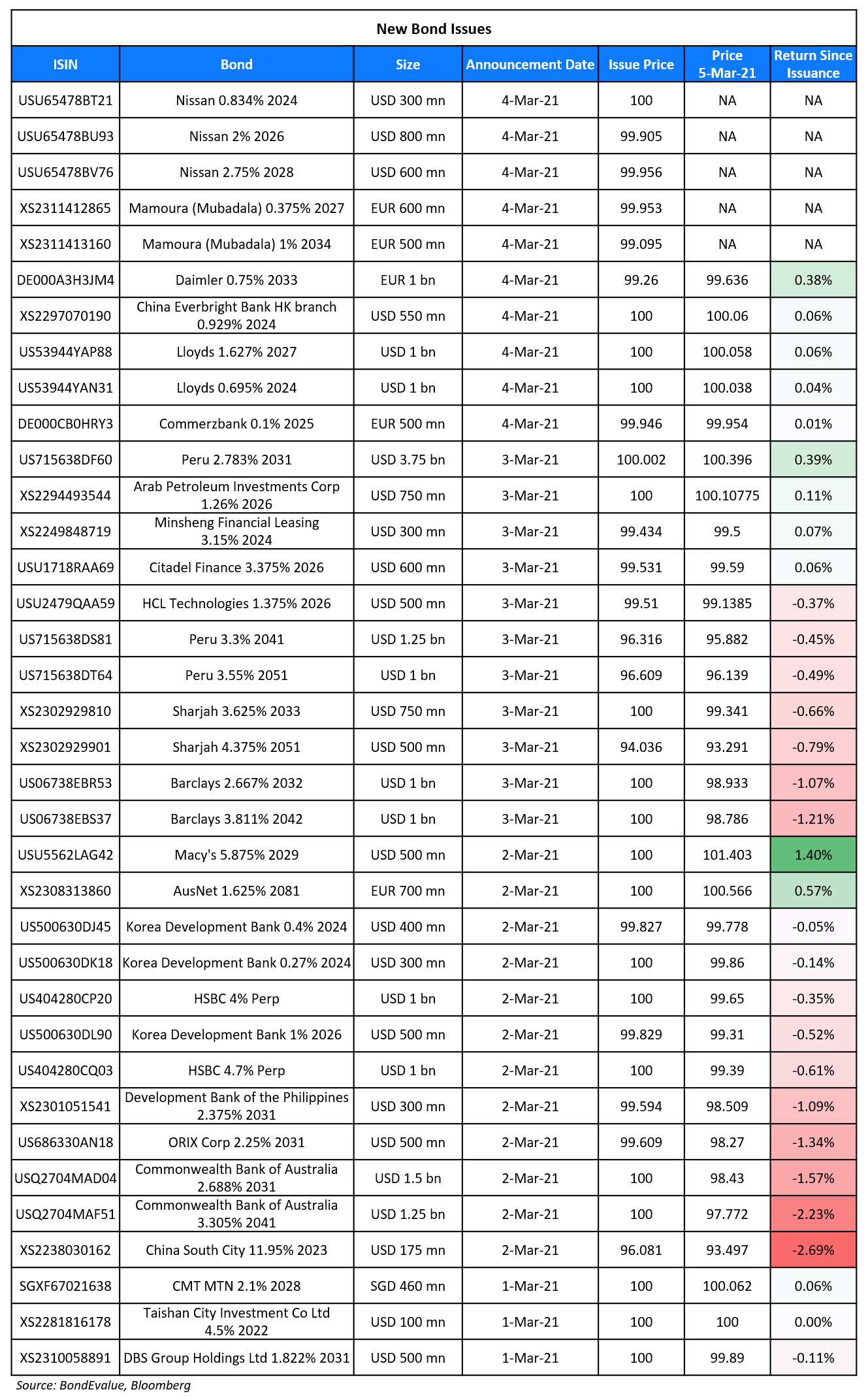 China Everbright Bank Hong Kong branch raised $550mn via a 3Y bond at a yield of 0.929%, or T+65bp, a strong 45bp inside initial price guidance T+110bp area. The bonds have expected ratings of BBB+/BBB and received orders over $4bn, 7.3x issue size. Proceeds will be used for general funding purposes.

Lloyds Bank raised $2bn via a two-part offering. It raised:

Indian corporates have taken the international bond markets by storm this year thus far, with total dollar bond issuance volume at $9.3bn, up almost 50% from the same period last year of $6.3bn. This increased supply of Indian dollar credit is on the back of favorable market conditions globally in the form of ultra-low yields, continued monetary and fiscal stimulus and tightening credit spreads. This has played out well particularly for emerging markets, India included, where funds from developed markets are finding their way to the greener pastures of Asia in pursuit of yield.

In this piece, we start by taking a look at the macro environment in the bond markets and then dive into dollar bond issuance from Indian corporates, highlighting some of the noteworthy deals.

Convexity hedging refers to a phenomenon of hedging portfolio interest rate exposure through bonds that stand to get impacted due to duration and convexity changes. This is most commonly used in mortgage-backed securities (MBS), given the prepayment profiles. For example, when interest rates rise, MBS investors would see their portfolio duration rise (as prepayments slowdown) and therefore they would have to reduce duration to their holdings. This reduction could be through selling longer duration treasuries or swaps. Thus for example, if rates rise, principally MBS duration rises and Treasury duration falls thus changing the hedge ratio of MBS vs. Treasuries – effectively having to sell more Treasuries than otherwise to hedge their MBS portfolios. These Treasuries would generally be higher duration/convexity bonds since they correspond to mortgage-related securities which have high durations. This is considered among the factors that can exacerbate sell-offs in Treasuries. In the recent sell-off in US Treasuries, besides inflation expectations, one of the factors attributed has been this phenomenon of convexity hedging.

The recent run-up in bond yields “was something that was notable and caught my attention,” he said. “I would be concerned by disorderly conditions in
markets or persistent tightening in financial conditions that threatens the achievement of our goals.” “We will be patient,” he said. “We’re still a long way from our goals.”

“Financial conditions are highly accommodative and that’s appropriate given the ground the economy has to cover,” he said. “If conditions do change materially, the committee is prepared to use the tools that it has to foster the achievement of its goals.” “Our current policy stance is appropriate,” he said. “It is a picture of an economy that is all but fully recovered,” he said. “Realistically, that is going to take some time.” “While there are still risks, there’s good reason to expect job creation to pick up in coming months,” he said.

“Powell stays dovish but not dovish enough to prevent further increases in yields.”

“Macro situations at both home and abroad have been generally improving, and (we should) pay close attention to price trends.” “Meanwhile, government bond issuance may accelerate in the second quarter, causing increasing supply pressure, so the upward trend of market interest rates has not yet ended.” 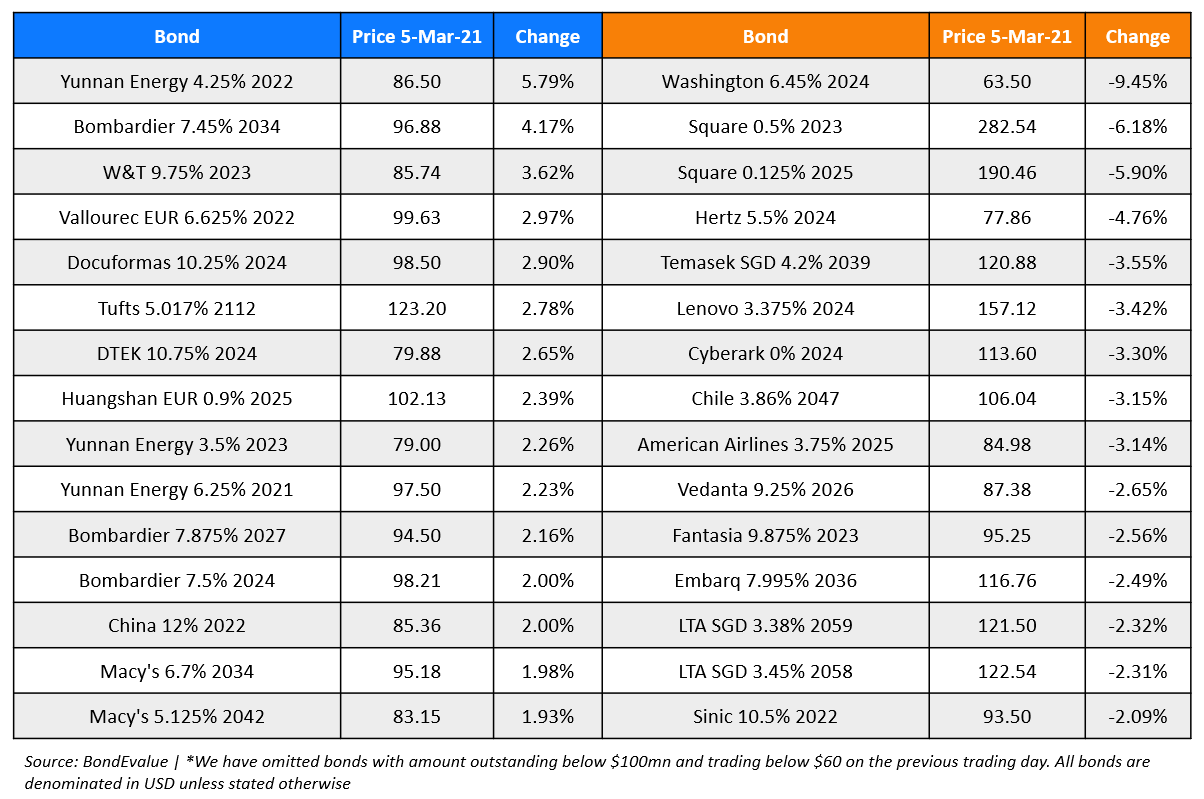