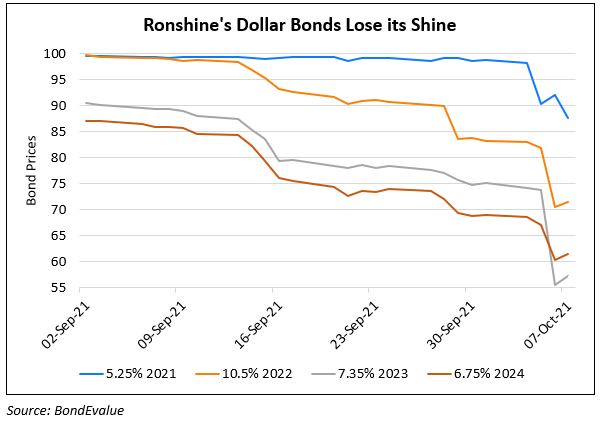 Dollar bonds of Ronshine China plummeted as contagion risks continue to weigh on lower rated Chinese HY developers. Ronshine’s 7.35% 2023s crashed 25% yesterday to 55 cents on the dollar and its Ronshine 10.5% 2022s fell 14% to 70.5 cents. Fitch had downgraded Ronshine two weeks ago to B+ from BB- reflecting weak profitability, low EBITDA margins and return efficiency as compared with similar rated peers. In mid-September, S&P downgraded the company to B from B+ citing similar reasons which can ultimately hamper deleveraging. Following S&P, Moody’s also downgraded the developer to B2 from B1 on similar reasons. Moody’s added that Ronshine has a large amount of debt with $1.5bn of dollar bonds and RMB 9.4bn ($1.5bn) of onshore bonds maturing or becoming puttable from September 1, 2021 to December 31, 2022 with its senior unsecured rated a notch lower at B3 due to structural subordination risks. Ronshine had RMB 27.3bn ($4.2bn) in unrestricted cash of as of the end-June 2021, which covered 109% of its short-term debt. Ronshine’s $150mn 5.25% bonds due December 3, 2021 have fallen 10.5 points this week to 87.71.