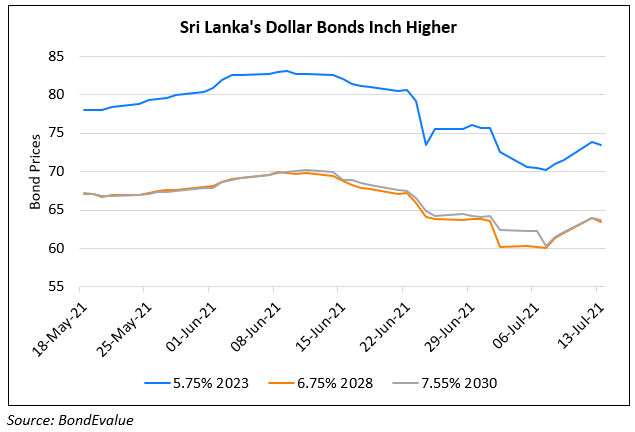 Sri Lanka’s dollar bonds moved higher by ~3% on Monday, stemming some of its losses in the prior weeks. Director of Economic Research in Sri Lanka’s central bank, Chandranath Amasekara said that the central bank was planning to acquire up to $600-$700mn a year from forex surrenders by banks that buy remittance and exporter dollars. About $350mn would be collected in 2H2021. This mechanism would help build its reserves which can be used to pay foreign debt outstanding. Analysts say that the addition of reserves via this mechanism can further pressure a pegged exchange rate. The peg to the US dollar, currently at 203 is already under pressure and parallel exchange rates have also developed amid rationing for imports they added. Separately, BowerGroupAsia (BGA), a strategic advisory firm that specializes in Foreign Direct Investment throughout the Indo-Pacific, in a note said, “If Sri Lanka’s Government and Central Bank continue to hold onto the current short-term policy measures, without immediately addressing the worsening crisis in the country’s external account, the Sri Lankan rupee is likely to plummet even beyond the current exchange rates prevailing in the black market… There is an urgent need for the country to seek the support of the International Monetary Fund (IMF) to resolve the current crisis in the country’s external account, which has led to shortages in US dollars in the country’s banking sector.”