Sunac China has sought to get a payment extension of two years on its local RMB 4bn ($628mn) bond due April 1. In return, Sunac’s chairman Sun Hongbin has offered to provide an unlimited joint liability guarantee. This comes just after Sunac said that it will not be able to publish its annual results on time that was followed by a 3 notch downgrade from Moody’s and a withdrawal of ratings by S&P.

Shimao Group and its unit Shanghai Shimao Jianshe are set to have a meeting with holders of an RMB 437mn ($69mn) ABS due April 4, regarding a proposed repayment extension on Thursday. Shimao and its unit are offering to repay at least 1% of the principal on March 25, and push out the due date for rest by two years, as per Bloomberg. There were no details available regarding the repayment schedule but the interest rate on the ABS would remain at 5.65%, it said.

Yango Group missed the coupon and principal payments due on three dollar bonds, which the company said may trigger an acceleration of existing offshore debt. Yango said that it did not pay the principal and coupons due under its 5.3% January 2022s and 10.25% March 2022s. It also did not pay coupons on February 25 under its 8.25% bonds due November 2023. This comes just after it failed to meet coupon payments on its 9.25% April 2023s and a 7.5% April 2024s.

Separately, Road King Infrastructure Ltd. saw its dollar bonds jump 14-20%, to its most on record. However, the reason for the rally was not available. 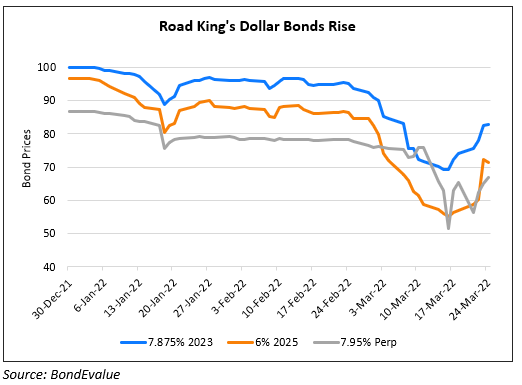